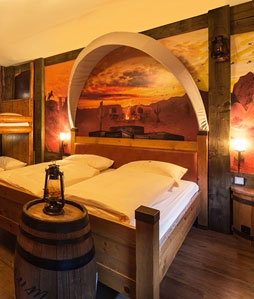 Heide Park Adventure Hotel is the Villa of the crazy Adventurer Lord Explorus. Each area of the hotel has interesting props from all over the workd, made by TAA Group, that tell stories of his journeys. Guests can sleep in Pirate, Demon and now in 22 new Western themed hotel rooms – decorated by TAA Group. For the children an indoor playground has been created.

The desert style Children Driving School “Wüstenflitzer” – for children from four until 10 years old learn in a fun and educative way the simple rules of driving while making their first drivers licence. TAA Group themed the entire Driving school are with cement works and props.

For TAA Group it is the seventh project in a row to theme the parks key attraction. This is our best reference that TAA Group delivers top quality at best value for money to be appointed year by year by Merlin Entertainments and the parks management. In total TAA Group realized its fourth Driving School in a themepark.

TAA Group themed in the past years already Transilvania area, the Wing Coaster “Flight of the Demons”, the Dive Coaster “KRAKE” and the maze “KRAKE alive!” as well as “TopiLaula” Splash Battle and Pirate Stunt Show that are in the Skull Pirates’ Bay area of Heide Park Resort as well as in 2009 the Maya Valley and pirate themed conference rooms at the hotel.